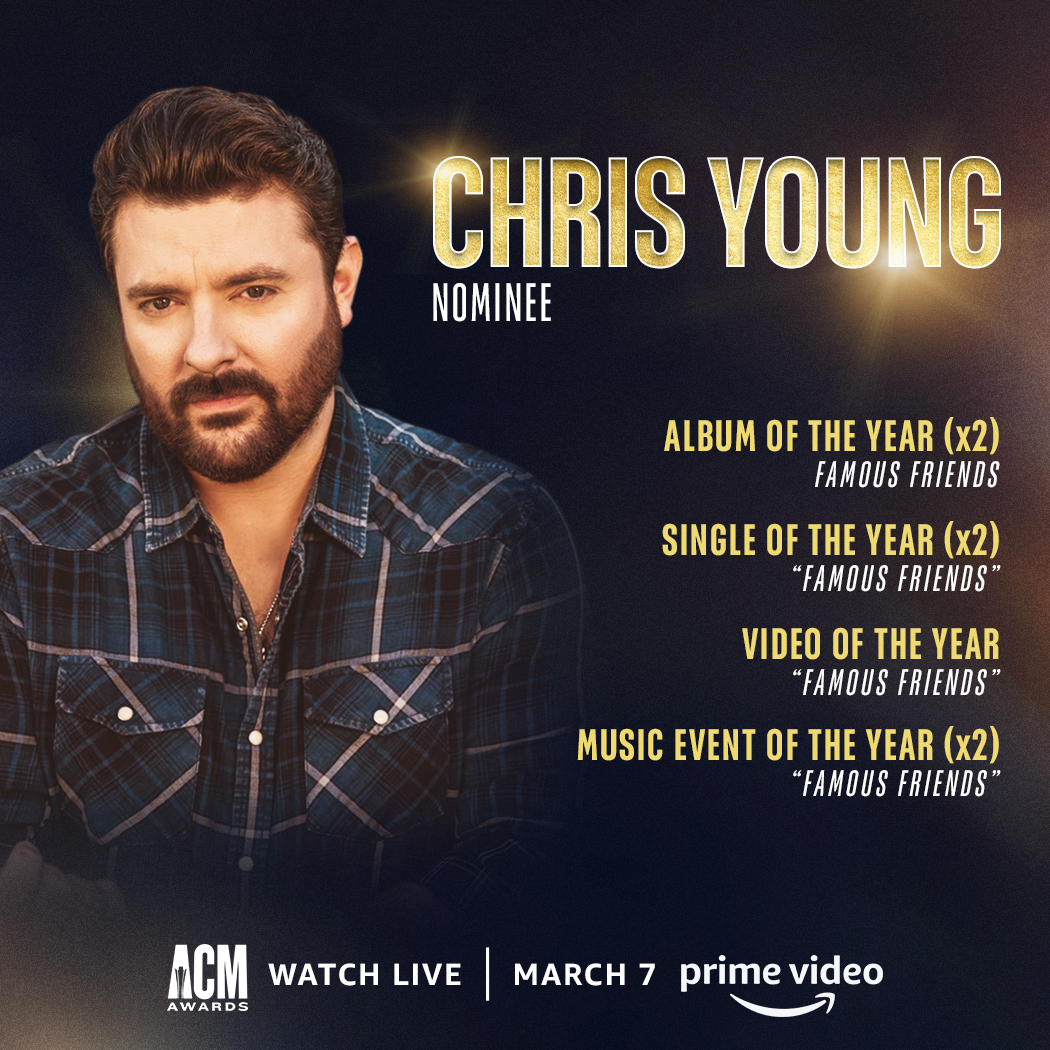 The pair shared their excitement via socials:
“7 NOMINATIONS!!!! Are ya’ll serious??? ACM – Academy of Country Music THANK YOU and see you in VEGAS! #LUCKYNUMBER7 Kane Brown” – @ChrisYoungMusic

Marking his second ACM Album of the Year nomination, his 8th studio album Famous Friends set a career first-week streaming record for Young at release. The 14-song project features several of Chris’s famous friends, including collaborations with Lauren Alaina (“Town Ain’t Big Enough”) as well as Mitchell Tenpenny on new single, “At The End Of A Bar,” plus background vocals from Sarah Buxton and Hillary Lindsey. Chris co-wrote 13 songs on the new record and co-produced the entire project, including a solo producer credit on the final track.

The multi-nominated title track cataloged an astounding 15 weeks inside the Top 5 on Billboard’s country radio chart and amassing over 200 million streams, “Famous Friends,” the “upbeat salute to the small town folks who keep the real world running” (Tennessean), took home the trophy for the fan voted CMT Collaborative Video of the Year and numerous CMA and AMA nominations. The song is also nominated for Country Song of the Year at the 2022 iHeart Radio Music Awards.

An anthemic tribute to the names, faces, and legendary stories that make up each hometown, “Famous Friends” is Chris and Kane’s first collaboration since working together on Kane’s 2017 song “Setting the Night On Fire.” Additionally, the song reunites the former tour mates from Chris’ 2018 Losing Sleep Headlining Tour — which included a sold-out hometown show at Nashville’s Bridgestone Arena — and is a full-circle moment since Kane’s first live concert experience as a young Country fan was a Brad Paisley and Chris Young tour stop.

ABOUT CHRIS YOUNG: Multi-platinum RCA Records Nashville global entertainer Chris Young has accumulated an impressive list of accomplishments, including membership in the iconic Grand Ole Opry, nearly 5 Billion on-demand streams, 13 Million singles sold, 12 career No. 1 singles, 22 R.I.A.A. Gold/Platinum/Multi-Platinum certified projects, 6 Country Music Association nominations, 4 Academy of Country Music nominations and 2 Grammy nominations,  along with wins for Performance of the Year and Collaborative Video of the Year at the CMT Music Awards. These accomplishments and more landed him in the Top 20 of Billboard’s top country artists of the decade.

“Famous Friends,” – Chris’s platinum-certified, multi-week chart-topping song with Kane Brown – is the title track to his “most personal album to date” (Forbes). The track earned the top spot on Billboard’s year-end Country Airplay Songs chart. In addition, the “booming duet” (Tennessean) “At The End Of A Bar” with Mitchell Tenpenny is the newest single from his 8th studio album, Famous Friends.

Named “one of his era’s finest traditionalists” by the Associated Press, Chris is an international ambassador for country music, performing to capacity crowds around the world. With a hit-packed set that highlights his twelve chart-toppers — including back-to-back No. 1s “Losing Sleep,” “Sober Saturday Night,” “Think Of You,” and “I’m Comin’ Over” — the Grammy and ACM nominated vocalist’s most recent headlining tour played to over 400,000 fans in 3 countries.

For more information and to catch a Chris Young show on the road, visit chrisyoungcountry.com and join @ChrisYoungMusic and his more than 6 Million fans on TikTok, Instagram, Facebook and Twitter.

ABOUT KANE BROWN: continues to expand the perception of Country music and break musical boundaries. Noted as the “future of Country” (Billboard) and one of “31 People Changing the South” (Time), the chart-topping entertainer earned an ACM Album of the Year nomination for Mixtape Vol. 1, (2020) and won an ACM Video of the Year Award for his anthem “Worldwide Beautiful.” Brown first broke through with his No. 1 self-titled debut album, which spent 13 weeks at the top of the chart and helped him become the first artist in Billboard history to top all 5 Billboard Country charts simultaneously. Brown’s “Heaven” and “What Ifs” are the 3rd and 7th most streamed country songs of all time. Brown’s sophomore album Experiment debuted No. 1 on the Billboard 200 and solidified Brown as the only male country artist in more than 24 years to achieve this all-genre chart feat. Experiment produced three back-to-back Double Platinum No. 1 hits and was ranked by The New York Times as one of the Top 10 Best Albums of the Year. One of only 10 country artists to sell out Los Angeles’ famed STAPLES Center (recently renamed CRYPTO.com Arena), Brown recently repeated this milestone on his newly launched Blessed & Free  headlining tour, where he is the first country artist to visit all NBA Arenas in one tour.  Brown’s current top 5 and climbing hit, “One Mississippi” released on the heels of his three-time ACM and CMA nominated multi-week Platinum-certified No. 1 single with Chris Young, “Famous Friends.” Brown recently released his latest collaboration, “Blessed & Free” with Grammy and Oscar Award winning artist, H.E.R. to critical acclaim from the The New York Times, Billboard, Rolling Stone, American Songwriter and UPROXX. For more information on Kane Brown, visit www.kanebrownmusic.com.
# # #